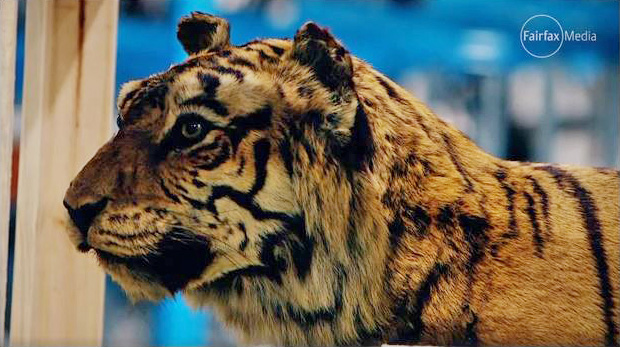 The hairy rhino is rolled out last of all the beasts from the back of the truck, then dispatched across the polished concrete floor. Every creature has its place in the scheme of things. Here, at the Australian Museum’s new storage centre, the stuffed Sumatran rhinoceros slots in neatly near a Komodo dragon and wallaroo.

The Castle Hill warehouse resembles a Noah’s Ark menagerie, without all that God stuff and two-by-two. Lions watch over lambs, seals sit near stoats, near badgers, near a reclining red kangaroo. Shelves are loaded with whale bones and plastic-wrapped baby leopards. Trolley-loads of specimens deliver new discoveries: marbled quails, black-tailed godwits, a Pondicherry partridge or two. 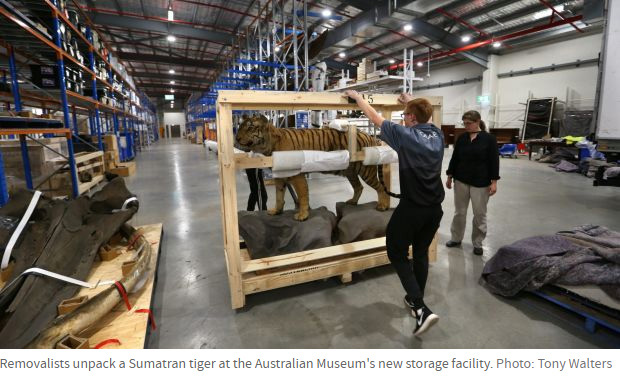 “I’ve been moving stuff up and down the east coast for years and I’ve never seen anything like this,” remarks a removalist, after a close encounter with a tiger. “I move office furniture, mostly.”

Close to 250,000 specimens that don’t fit within the museum’s city site are filling its first custom-built off-site storage facility, under a joint venture between the Australian Museum, the Museum of Applied Arts and Science, and Sydney Living Museums. The government-funded Castle Hill site, at the Museums Discovery Centre, contains collections from all three museums. 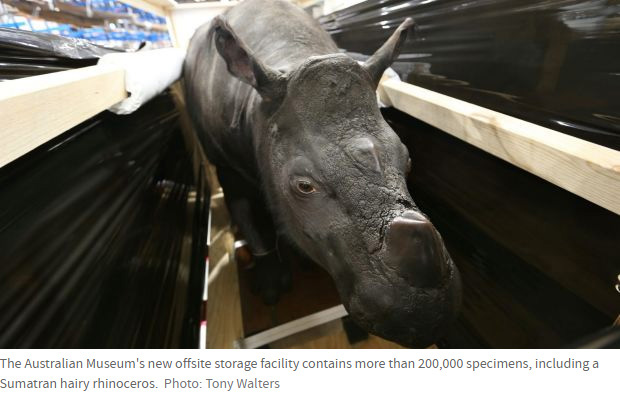 The new building housing the Australian Museum’s collection sits on 3000 square metres. The temperature is set at a mild 21 degrees, with relative humidity at 50 per cent.

If you squint, it could be an Ikea, albeit one containing 20,000 birds eggs, 150 seal skulls, 14 lemurs, two giraffes and a mounted ostrich. The building also houses much of the museum’s cultural collection, including paintings, canoes and 21,000 spears.

Managing the three-month move, which started in September, is Dr Anja Divljan, who has a PhD in flying fox ecology and usually works in the museum’s terrestrial vetebrates section. Stranger still, she likes moving. “It gives you an opportunity to declutter.”

Creatures are first packed in specially built stillages and frozen for seven days to kill any bugs, before being thawed and stored. Finding space for everything is a bit like Tetris, Divljan says. “I have tried to keep it neat but it’s an eclectic collection.”

The museum’s off-site stocks have moved at least six times since the 1970s, prompting chance discoveries such as an enormous sunfish inside a crate labelled “baby elephant”.

The Museums Discovery Centre offers public access to part of the collections of all three museums. The Australian Museum plans to hold guided tours of its own warehouse from next year. 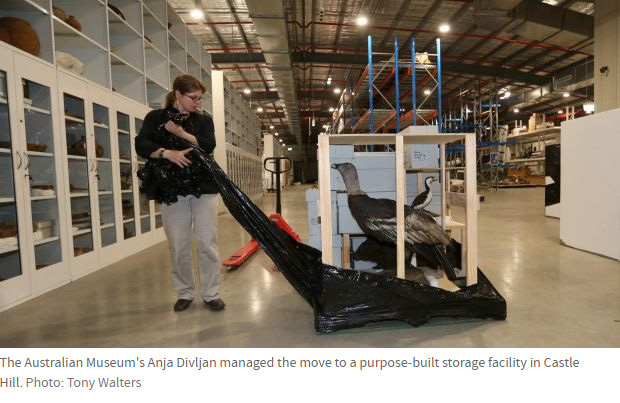 “Generally, the first question we get from visitors is: ‘Is that a real animal?’,” Divljan says. And the second question? “Did you kill it?”

Most of the material has come to Castle Hill from a temporary storage site in Lilyfield, inside an old parachute factory with no air conditioning or heating. I visit on a Monday morning, when natural sciences conservator Sheldon Teare is preparing seven pallets of whale skulls and skeletons for the move.

He’s been readying the collection for removal from this aged building for more than a year, working through the winter dark and the wretched humidity of summer. “This place is pretty creepy, it makes some very weird noises,” he says. He’s not bothered by stuffed animals. “I don’t mind taxidermy eyes,” he says. “It’s paintings that freak me out – the eyes that follow you.”

We stroll past a white box marked “wallaby pink muffs”, a dinosaur turtle thing and several black plastic-wrapped stillages. “Inside those ones are two boxing red kangaroos,” he says. “There’s a lion in that one. This one could be almost anything.” 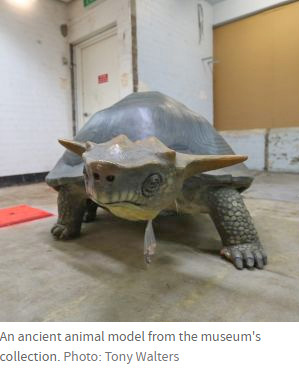 Moving a museum was never going to be easy. Objects in the oversized collection are large, heavy and dusty. Each move risks damaging the collection. Teare prefers the creatures safe and sound on a shelf somewhere. But he seems to be in the swing of this whole moving thing.

Have you ever considered a career change, I ask. “I never want to move again,” he says.